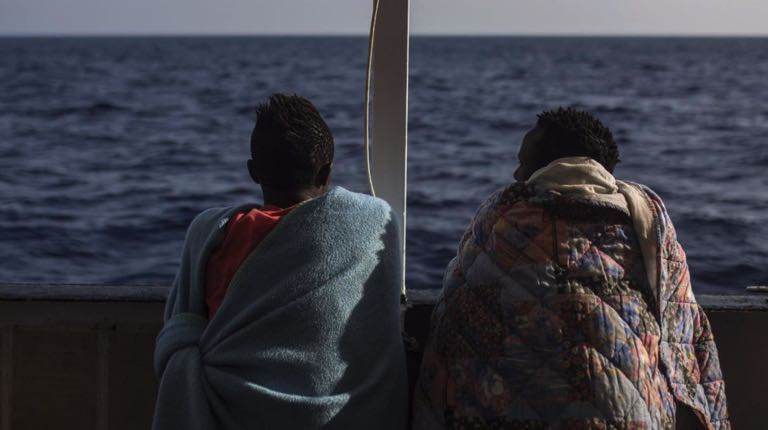 Europe fails refugees and migranti in the central Mediterranean

In June and July 2018, as people continued to embark on unsafe boats, including to flee torture, rape, labour exploitation, arbitrary detention and other abuses in Libya, deaths of refugees and migrants at sea surged to a combined total of over 721 along the central Mediterranean route – with 564 people found dead or reported missing in June and 157 in July.1 In only two days, between 19 and 20 June, approximately 220 people reportedly drowned in three separate incidents off the coasts of Libya.2 In the first seven months of 2018, a total of 1,111 people were reported dead or missing along the central Mediterranean route.3 The death rate among those attempting the crossing from Libya has surged to 1 in 16 in the period June-July, four times higher than the rate recorded in the first five months of the year, which was 1 in 64.4 This is in stark contrast with the overall decrease in the number of arrivals to Italy. With 18,645 people arrived in Italy by the end of July 2018, this was the lowest number of arrivals registered in the last five years, a decrease of about 80 percent in comparison to the same period in 2017 and 2016.5

Some deaths at sea along this perilous route are unavoidable, as long as smugglers force people to travel in unseaworthy and overcrowded boats, with no food, water, safety equipment, or sufficient fuel on board. The recent surge in deaths at sea, however, cannot be dismissed as an inescapable misfortune.

Since the beginning of June 2018, Italy’s withdrawal from its leading role in coordinating rescues at sea in the central Mediterranean and its new policy of refusing disembarkation to vessels carrying rescued refugees and migrants, have rendered the search and rescue system unreliable, unpredictable, and punitive. Rescuers and frail and exhausted rescued people are left stranded at sea for days, even weeks, as each disembarkation is negotiated individually. There is the concrete risk that shipmasters, faced with uncertainty over the place and time of disembarkation, refrain from responding to distress calls, at a time when fewer dedicated resources are available for search and rescue. There is also a real risk that shipmasters start tocomply with the Libyan Coast Guard’s instructions to disembark people rescued at sea in Libya, thus sending refugees and migrants back to a country where they are at risk of torture or ill-treatment – a so-called“pushback” – in breach of international and European law. On 30 July, the Italian supply vessel Asso Ventotto has done exactly that, setting a dangerous precedent.

The increasingly hostile treatment by Italian and Maltese authorities of non-governmental organizations (NGOs) dedicated to saving lives at sea is depleting the central Mediterranean of vital rescue assets. Instead of being applauded, NGOs, which in 2017 and until May 2018 had carried out about 40 percent of rescues,6now face slander, intimidation and court cases. The authorities have recently impounded a number of NGO- owned vessels. Those still operating are confronted with refusals and delays before being allowed to disembark. Increasingly, they have to travel long distances to disembark people rescued at sea, in contravention of the law of the sea, or to load essential supplies, at the cost of not being present for long periods in the area off Libyan coasts where people usually need assistance.

Longstanding, unresolved tensions in coordinating rescues at sea between Italy and Malta, which had been set aside in recent years as Italy was accepting nearly all disembarkations, have re-emerged, adding to the unpredictability of the rescue system.

Unnecessary delays in disembarkation forced people in need of urgent and essential assistance – including injured people, pregnant women, torture survivors, people traumatized by shipwrecks or other experiences, and unaccompanied minors – to remain stranded for days on board vessels that had little capacity to meet their needs. Some of the people disembarked in Italy were severely dehydrated and malnourished, having endured months of food deprivation and other abuses in captivity in Libya before departing on a perilous journey.7 This testifies to the extremely harsh conditions and inhumane treatment refugees and migrants continue to endure in Libya, often constituting the very reason why people attempt to flee the country.

Despite this, Italy and the European Union (EU) are bolstering their policy of supporting the Libyan Coast Guard to ensure it prevents departures and carries out interceptions of refugees and migrants on the high seas in order to pull them back to Libya. This is also contributing to rendering the central Mediterranean route more dangerous for refugees and migrants, and rescue at sea unreliable.

A surge in interceptions by the EU-supported Libyan Coast Guard has resulted in a dramatic rise in the number of people returned to Libya and arbitrarily held in detention centres run by the General Directorate for Combating Illegal Migration (DCIM) within the Ministry of Interior. According to DCIM, the number of detainees has more than doubled in recent months, from around 4,400 in March to more than 10,000 –including around 2,000 women and children – at the end of July. Virtually all those in these centres have been intercepted at sea and returned by the Libyan Coast Guard, who are equipped, trained and supported by European governments.

The EU and Italy continue to pursue this policy disregarding the fate of those taken back to Libya, where violence is rife, or the Libyan Coast Guard’s track-record of human rights violations and its incapacity to ensure effective and timely rescues in international waters. While increasingly relying on the Libyan Coast Guard, the EU and Italy have not demanded accountability for the Libyan Coast Guard’s actions or sufficient safeguards for those disembarked back in Libya. As such, they have become complicit in the human rights violations refugees and migrants are almost certain to face once back in Libya.8

Italy, European states and institutions must act urgently to prevent further avoidable loss of life at sea in the central Mediterranean by ensuring that all shipmasters able to undertake search and rescue operations feel encouraged and supported in doing so and are allowed to disembark swiftly at a place of safety, where those rescued can access assistance and protection. They must also reform the Dublin system by overhauling the rationale which assigns responsibility to the state of first entry and replacing it with a mandatory distribution mechanism of asylum-seekers. Finally, they must reset cooperation with Libya, focusing on the priority of protecting the human rights of refugees, asylum-seekers and migrants in the country, and ensuring that people rescued in the central Mediterranean are not disembarked back in Libya, where they are at real risk of torture and ill-treatment.

Scarica il rapporto completo: Between the devil and the deep blue seaDownload