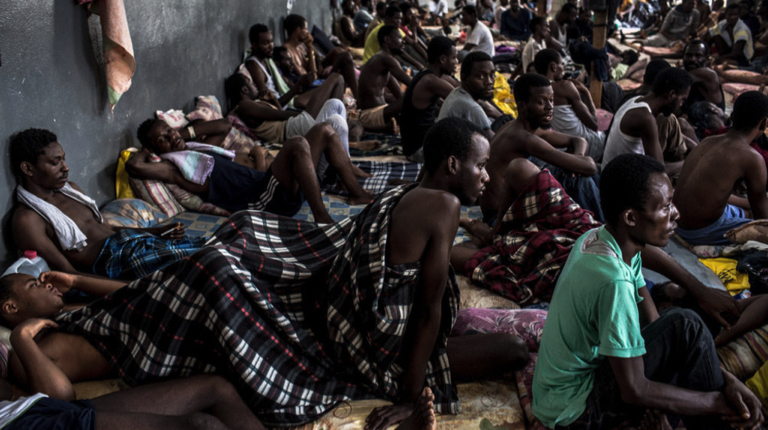 Six years ago, what was supposed to be a peaceful uprising against longtime dictator Muammar Qaddafi turned into a NATO-backed war that ended with Qaddafi’s death in October 2011. In the intervening years, the country has remained divided, a situation exacerbated since 2014 by a renewed armed conflict and two rival governments vying for power and territory.

During the uprising and conflict, repeated and widespread abuses of human rights were reported, such as rape, illegal detentions and trials, torture, assassinations and attacks against the press. A report published in February 2016 by Amnesty International alleges war crimes committed by all sides, notably Islamic State (ISIS), which has carried out public executions, serious abuses faced by migrants and refugees, lack of access to hospitals and schools, attacks against journalists, human rights activists and NGOs workers, declining women’s rights and a dysfunctional legal system.

Also in February 2016, Zeid Raad al-Hussein, United Nations High Commissioner for Human Rights, said, “Despite the human rights situation in Libya, the country only sporadically makes the headlines. A multitude of actors – both state and non-state – are accused of very serious violations and abuses that may, in many cases, amount to war crimes.” A UN report published the same month on the situation since 2014 described ‘unlawful killings’ by most major armed groups, including ‘executions of people taken captive, detained, abducted or perceived to be voicing dissident’. Torture and ill-treatment have been widely used in detention facilities, leading to the death of detainees in various places such as military police and intelligence facilities. This is a worrying situation, given that thousands of individuals have been in detention since the 2011 armed conflict, most of the time without any examination of their case and sometimes ‘held in secret or unrecognized facilities operated by armed groups’.

Abductions and disappearances have also become frequent. For example, the Libyan Red Crescent Society reported that more than 600 people went missing between February 2014 and April 2015, and at least 378 others are unaccounted for. “Hundreds of civilians have been abducted on a whim simply because of where they are from, or because they are believed to support a rival political group. In many cases, they are kept hostage to pressure an armed group into a prisoner exchange or to coerce the family to pay a ransom,” said Said Boumedouha, acting director of Amnesty International’s Middle East and North Africa Programme, in August 2015.

Although Sirte, ISIS’ last stronghold in Libya, was liberated in December 2016, ISIS publicly killed civilians in the city for two years. In May 2016, Human Rights Watch (HRW) reported the executions of at least 49 people by methods such as decapitation and shooting. Those killed included alleged spies and sorcerers, wounded or captive members of enemy forces and a young man accused of blasphemy. ISIS also kidnapped dozens of Libyan militia fighters, whose fate remains unknown. Sirte residents described ‘scenes of horror – public beheadings, corpses in orange jumpsuits hanging from scaffolding in what they referred to as “crucifixions”, and masked fighters snatching men from their beds in the night’.

Libya is on the transit route to Europe for refugees fleeing various African countries, including Eritrea, the Central African Republic, Mali and northeastern Nigeria. In 2015 alone, around 3,000 people drowned on the crossing from North Africa to Italy. In Libya, they are ‘particularly vulnerable to exploitation and abuse by authorities, armed groups and smugglers, [and] many migrants have endured prolonged arbitrary detention, torture, forced labour, extortion, trafficking and sexual violence’, according to the February 2016 report by the UN. ‘Sub-Saharan Africans have been particularly at risk, while migrant women have been facing sexual violence and exploitation both in and outside detention facilities. A large number of migrants remain in detention without access to judicial review, including at least 3,245 people in western Libya alone.’ The International Organization for Migration (IOM) estimates that there are over 264,000 migrants and refugees currently in Libya, while the UNHCR put the number of registered refugees and asylum seekers, half of them from Syria, at 38,000 in 2016. Amnesty International published the testimonies of some of these refugees and migrants who arrived in Italy, like 21-year-old Amal from Eritrea, who was captured by ISIS fighters in Libya. “We were beaten for three months, sometimes they used their hands or a hose or sticks. Sometimes they would frighten us with their guns or threaten to slaughter us with their knives. They considered us their wives and forced themselves on us. We spent four months in that situation. It was a very big place and there were many men. Every day some of them would abuse us.”

Around 350,000 Libyans have been displaced by the conflict since 2014, according to the UNHCR, and Amnesty International reports that ‘nearly 2.5 million people need humanitarian help, including clean water, sanitation and food’ and that ‘around 20 per cent of children in Libya are not able to go to school’. The organization called on the UN Security Council to impose targeted sanctions against those involved in the violation of human rights or international humanitarian law, as per resolution 2174 adopted in August 2014. Indeed, since 2014, military attacks have particularly impacted highly populated residential areas like Benghazi, Tripoli, Warshafana, the Nafusa Mountains area and the south of Libya. The UN estimates that ‘sufficient precautions have not been taken to protect civilians as well as people and objects given protection under international humanitarian law, including health facilities, ambulances and medical workers, and humanitarian workers’.

Media freedom in Libya is declining. In 2016, the country ranked 164 in Reporters Without Borders’ (RWB) World Press Freedom Index, down from 154 in 2015. RWB stated that ‘the open conflict between rival governments in Tobruk in the east and Tripoli in the west from 2014 onwards resulted in a climate of complete impunity for crimes of violence and abuses against professional and non-professional journalists’. In February 2015, HRW issued a report entitled War on the Media, in which it described how the new-found media freedom following the 2011 revolution has been eroded by the subsequent chaos and insecurity. The report stated: ‘Between mid-2012 and November 2014, Human Rights Watch documented at least 91 cases of threats and assaults against journalists, including against at least 14 female journalists and media workers. This figure includes 30 cases of kidnappings or short-term arbitrary detentions of journalists, mainly by militias, and eight killings of reporters. In a few cases, the journalists may have been unintentionally injured or killed while reporting on violent incidents. But in most cases documented by Human Rights Watch it was clear that armed groups targeted journalists to punish or censor their reporting. In the same period at least ten journalists fled the country after being attacked or threatened. Human Rights Watch also documented 26 cases of armed attacks against the offices of television and radio stations.’ No promise of press protection has been made so far by any of the competing governments.

In 2013, HRW published guidelines to help secure women’s rights in Libya in a number of key areas. Four years later, the situation of women in Libya only seems to have worsened, notably since 2014 with the assassination of well-known activists including Salwa Bugaighi, Fariha al-Berkawi and Intissar al-Hasaeri and the harassment and assault of many others. These attacks are ‘designed to send a broader message that women should not be vocal in the public sphere’, according to the UN, which also provided information about sexual violence. ‘In one case, a woman said she was abducted in Tripoli by members of an armed group, drugged and raped repeatedly over six months. She also provided information that six girls as young as 11 were subjected to sexual violence by members of the same group.’ New laws have also been implemented, including making child marriage easier and allowing men to divorce without obtaining court approval.

In order to limit and punish attacks, abductions and abuses of all kinds, a strong legal system is needed. Yet when lawyers, judges and prosecutors are themselves under constant threat, as highlighted by the UN, their work becomes dangerous and difficult. “This report clearly shows that the justice system does not have the means or capacity to conduct prompt, independent and credible investigations or to prosecute those responsible for human rights violations or abuses,” Zeid Raad al-Hussein said. The report added that ‘since 2014, judges and prosecutors have been subject to killings, court bombings, assaults and abductions. As a result, courts in Derna, Sirte and Benghazi ceased activities in 2014, with limited re-activation in parts of Benghazi in 2015, and victims have had little recourse to seek protection or to an effective remedy. This impunity is facilitating further abuses’. Furthermore, the Libyan authorities have refused to cooperate with the International Criminal Court, notably concerning  the convictions of Qaddafi-era officials, which included the imposition of nine death sentences, following a trial marred by flaws.