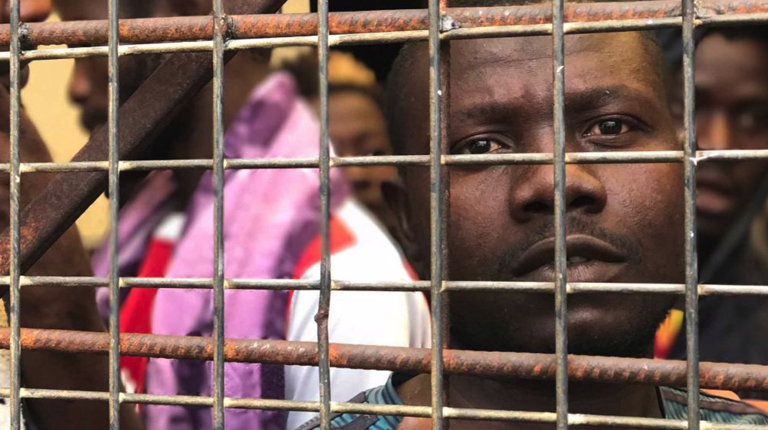 di Raja Razek – Tripoli, Libya (CNN)  Scores of people stand packed in the cramped quarters of the Treeq Alsika Migrant Detention Center in Tripoli, helplessness etched across their faces. They’re just some of 700,000 migrants the United Nations believes are now stuck in Libya. They fled poverty and repression in sub-Sahara, giving up everything to undertake a desperate — and ultimately unsuccessful — voyage to get to Europe. Exploited by shameless smugglers who care little whether they live or die, many of the inhabitants of this government-run detention center give nightmare accounts of forced labor, exploitation and inhumane conditions at the hands of the men they paid to deliver them across the Mediterranean.”I have been here three weeks now, nobody writes my name. They don’t know my name,” says 29-year-old Ali Jemma from Ghana, one of the many migrants here who feels trapped and forgotten in the Libyan capital. He had hoped to reach Italy, but six months on, all he wants is to return home.

Ali Jemma is one of the many migrants detained at the Treeq Alsika Migrant Detention Center in Tripoli. “In this area here we have above 1,000 people, and the place is very tight for them,” says Anes Alazabi, the detention center supervisor. “A few people can’t even find a place to sleep, and we’re missing a lot of stuff for the migrants, like clothes, covers, pillows, slippers, all that stuff.”In another room, hungry and thirsty men sit on the crowded floor. “We did not know the journey was going to be like this,” says Victory, a 21-year-old migrant from Nigeria who was auctioned off by his smugglers in Libya before he was eventually freed.

Libyan officials concede that the detention centers like Treeq Alsika in Tripoli are crowded, but insist they are doing what they can to help migrants return home. In the warehouses where the smugglers held them, some migrants were beaten and didn’t see the sun for days at a time. Others were sold into work.  Now they are broke and awaiting deportation to their home countries.”I spent my life savings leaving the country,” Victory says. “I go back and start back from square one. It’s very painful. Very painful.”Related: Where lives are auctioned for $400

Victory wanted to start afresh in Europe, where he believed more opportunities would be available. Over a year later, he tells CNN he has given up on this dream.Libya has become a congested transit point along the central Mediterranean migrant route. Those rounded up by the authorities never intended to stay in the country, but are now forced to stay here until arrangements can be made to repatriate them.Outside the center, women line up in the rain to get on a bus bound for the airport, where they will be sent back to Nigeria.One woman says she’s pregnant. “Help me,” another pleads. Both are in tears as they prepare to be deported, leaving their husbands behind in Libya.

Another woman tearfully says goodbye to her husband as she must also leave the country alone. The two women say they received the necessary documents from their embassy to be sent home from Libya, but their spouses have yet to.Alazabi, the supervisor, tells them that the men will follow in ten days. The women plead with him to make an exception.

But without the proper paperwork, Alazabi says his hands are tied. He directs the women toward the bus, telling them they will see their husbands soon.